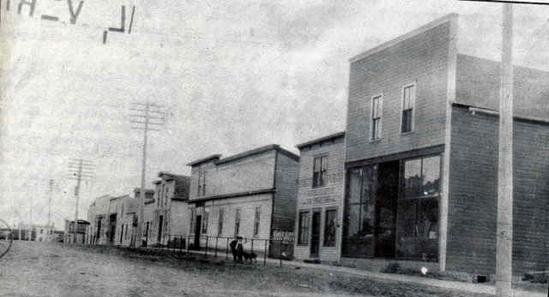 The first homesteaders settled around 1870. Butterfield had a population of 17 (10 men and 7 women). The railroad was laid in 1871 and the population grew. Butterfield Township was organized on July 2, 1872. The first store was built in 1872 but tore down due to lack of business; however the town continued to grow and main street became populated with new stores that prospered. In 1875 a flat-house for buying grain, which benefited the farmers was built followed by a lumber yard, general store and grocery store. By 1895 Butterfield had a thriving community of stores, elevators and tradesmen and the township population was over 400. It also had a school and several churches.

Butterfield was incorporated April 5, 1885. Bern Remple was the first elected mayor, who was also responsible for the first store built.

So where did the name Butterfield come from? The story is based mainly on rumor. The story goes that James Butterfield, an engineer on the St. Paul and Sioux City Railroad was its namesake. But the rumor is that he ran off with the wife of a local resident in 1876. Township residents were so incensed that they renamed the township Nichols Landing. Why the new name and if this romance even happened are lost to history. The rumor continued that James Butterfield restored his good name when he became a prominent railroad machinist credited with inventing the locomotive ash pan. After two years, the name of Butterfield was restored to what was then a township. If nothing else, the affair spices up the story of very early Butterfield.