Threshing - Demonstrations of threshing using the old-time machinery in the lot just south of the exhibits take place on both days of the Threshing Bee. The wheat and oats used in the threshing process during the show are grown on the 12-acre plot on the south side of Voss Park. Take a step back in time to watch the machines in action as they thresh the wheat and oats.

Two noteworthy double-winged threshing machines are also on hand - a 32" Minneapolis and a 36" Minneapolis. In addition a rare 1914 Wood Brothers 40" machine will be featured. There is a 1914 Stearling Thresher and two Bell City Models that will be on display.

Plowing - Ten acres of ground is set aside for plowing demonstrations. An eight-bottom John Deere plow donated to the Bee in its early days will be hooked up to steamers, small tractors, horses and possibly mules for various demonstrations.

Steam Tractors - If any piece of machinery represents the nostalgia of early farming on the prairie, it's the steam engine. Five of them are at the Threshing Bee, hissing and chugging under load as they belt up to threshing machines and the saw mill.

Steam engines provided the first portable power for real muscle jobs such as threshing, plowing, sawing, logging and building roads. The bigger the machines, the more powerful they were. When steam power was first harnessed, man set a powerful force in motion that served him well until the more-efficient gas tractors took over. From the late 1800s and into the 1920s, these powerful giants were the workhorses. At the threshing Bee, you'll see the 65-hp Case steam engine that started it all at the first show back in 1967. There is also a 24-hp Minneapolis that features a distinctive red water tender forming a huge hood ornament. A 1913 40-ho Case steam engine was added to the show in 2006. 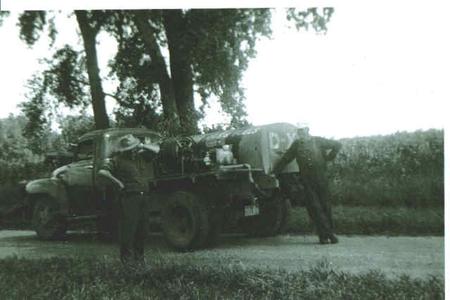 Gas Tractors - Gas tractors eventually put horses out of business on the family farm. Two of the largest on display are the huge E-Rumely and the 35-70 Minneapolis, both of which were used in day-to-day farming life decades ago. The oldest tractor in the collection is a 1908 International. You'll see John Deere, Allis Chalmers, Fordson, Case, International, Farmall, Avery, Waterloo Boy Titan, Aultman-Taylor and Hart Parr of all shapes and sizes.

Horse drawn equipment - It may be hard to remember or imagine how farm work was done before tractors were a primary substance on every farm but not at the Bee. Demonstrations can be seen by the Log Cabin of how horses were used to grind grains or elevate harvested grain from a wagon onto a truck. Weather permitting, you may also have the opportunity to see how fields were plowed with horses.

Wood Cutting - Back when the settlers first came to southwestern Minnesota, wood was a vital resource. That is why the various wood cutting exhibits are a cornerstone of the Threshing Bee. You'll ses several antique machines that can turn a log into many different things. Some wood-cutting machines could be run with a gas engine and did not require a tractor for power. You'll see both varieties at the Threshing Bee. Steam and gas tractors will belt up to the saw mill housed in it's own shed where logs are turned into usable lumber. A lakeside log cabin is also available for viewing during the Threshing Bee. You'll also find a machine that makes veneer for egg crates, lathes, shingles and firewood. Antique drag saws, the forerunner to the chain saw, cuts logs as well. A wood working shop is also part of the display. There you are able to see pieces of furniture like chair legs being fashioned on a spindle mill. A copying lathe that is used to copy molds of wood products like baseball bats and rolling pins is also on display.

Steam Power House - Out on the threshing grounds at Voss Park you have the chance to see several mobile steam traction engines in action, while in the Steam Power House you'll see a stationary version. Inside is the large but quiet Vilter Corliss. This engine is the largest in the Steam Power House You'll be impressed by the silent, yet powerful stroke of its piston. A Vilter Corliss is on display. The 1901 engine came from the Hauenstein Brewery in New Ulm and it used to run the brewery's refrigeration system. Also on display you'll find a six-ton American Ball engine with generator. Other engines of interest include the Creamery Package Company engine from Mankato, the single acting twin cylinder marine engine which runs a small boat, a Fairbanks Morse engine with a 3 x 4 bore, and stroke which comes from the 1880s used by a coal stoker. In all, there are 12 steam engines in the Power House running off a boiler located in the rear of the building. Also included in the collection are a Bownell, with an 8 x 10 bore and stroke, and a 9 x 12 Porter which was used at Carleton College in Northfield. The Steam Power House also has some whistles on the roof, which can make quite a chorus when they go off.

Gas Engines - Dozens of gas-powered engines will be on display, all carefully restored by their owners. Gas engines were not only used in the field and barns, but also in the farmhouse. They were used for tasks like laundry, shucking corn and helping grind the grain into feed for the livestock. You'll find gas engines in many different sizes and shapes. One of the models is a Hart Parr which has the unique feature of running upside down.

Antique Cars & Trucks - Hundreds of antique vehicles are on display at the Threshing Bee. Including this restored 1948 Chevrolet Loadmaster fuel truck. 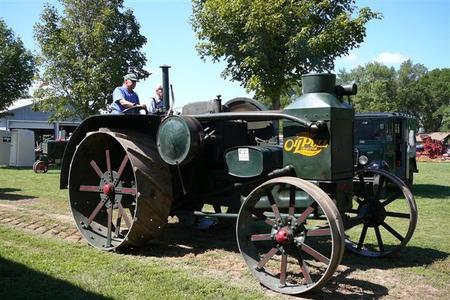 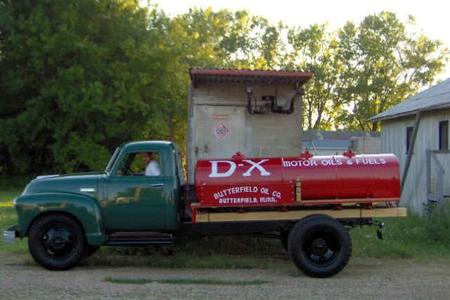 This particular truck was used to deliver bulk fuel in the Butterfield area from
1948 to 1960.

Scales & Miniatures - There are many different smaller versions of threshers and tractors also on display.